Alternative meats and alternative statistics: What do the data say? 1 of 4

The alternative animal product arena is complex and quite varied. Some products are entirely plant product derived and employ only plant origin proteins or metabolites. Other endeavors are using cells of animal origin to derive a more structurally similar meat yet still with animal genomes. Most of the analysis and discussion, though, has focused on bovine alternatives because of the iconic position of cattle in many climate and sustainability discussions.

There are two ‘alternative meat’ sources that are often confused. One is so called “plant-based” or “vegan meat replacements” (e.g. Beyond Burger). These types of “veggie” burgers have been around a long time (e.g. Morningstar Farms, Boca Burgers), and now have some bells and whistles like genetically-engineered heme to make them bleed (e.g. Impossible Burger), but at the end of the day they consist of plant-sourced material being molded into a meat substitute type product. They are currently being sold at some fast food restaurants, and in supermarkets. Impossible Burger recently received safety approval for its genetically engineered heme as a color additive in ground beef analogue products, opening the way for its sale in supermarkets.

These are DIFFERENT to cultured meat, which is the term I am going to use to refer to animal cells grown in cell culture. This technology has other terminology – some appealing (e.g., in vitro meat, cellular meat, fermented meat, or slaughter-free meat, clean meat), and some derogatory (e.g. artificial meat, synthetic meat, zombie meat, lab-grown meat, non-meat, or artificial muscle proteins). This is discussed in my 2018 article “Why cows are getting a bad rap in lab-grown meat debate”.

Cultured meat requires the initial collection of stem cells from living animals and then greatly expanding their numbers in a bioreactor, a device for carrying out chemical processes. These living cells must be provided with nutrients in a suitable growth medium containing food-grade components that must be effective and efficient in supporting and promoting muscle cell growth. A typical growth medium contains an energy source such as glucose, synthetic amino acids, antibiotics, fetal bovine serum, horse serum and chicken embryo extract. Some of these components are problematic for consumers wishing to avoid animal products. The status quo for culturing tissue involves the use of fetal bovine serum, a byproduct of the livestock industry collected from fetuses in pregnant cows that are being slaughtered.  Large uncertainties remain in what a viable, animal-free, growth media may look like. 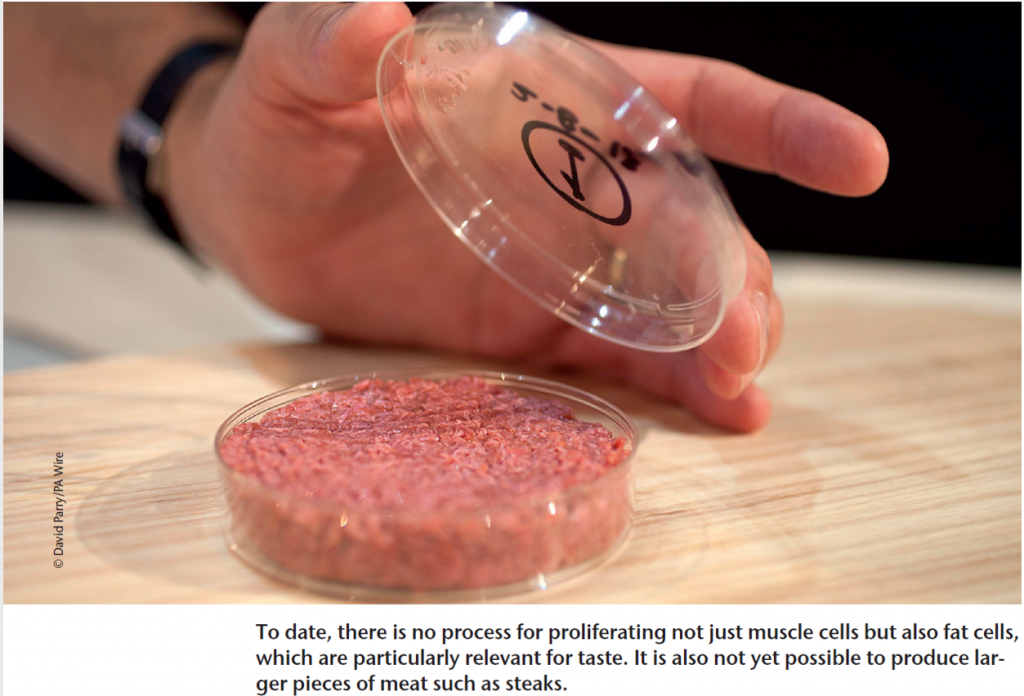 If cultured meat is to match or exceed the nutritional value of conventional meat products, nutrients found in meat not synthesized by muscle cells must be supplied as supplements in the culture medium. Conventional meat is a high-quality protein, meaning it has a full complement of essential amino acids. It also provides a source of several other desirable nutrients such as vitamins and minerals, and bioactive compounds. Therefore to be nutritionally equivalent, cultured meat medium would need to provide all of the essential amino acids, along with vitamin B12, an essential vitamin found solely in food products of animal origin. Vitamin B12 can be produced by microbes in fermentation tanks, and could be used to supplement a cultured meat product. It would also be necessary to supplement iron, an especially important nutrient for woman of reproductive age that is also high in beef.

The process for making cultured meat has technically challenging aspects. It includes manufacturing and purifying culture media and supplements in large quantities, expanding animal cells in a bioreactor, processing the resultant tissue into an edible product, removing and disposing of the spent media, and keeping the bioreactor clean. Each are themselves associated with their own set of costs, inputs and energy demands.

Cultured meat production will likely require more industrial energy than do livestock to produce equivalent quantities of meat. The reason is that all of the biological structures avoided in cellular agriculture play important roles in meat production. An animal’s skin regulates temperature; internal organs digest food, circulate nutrients, and distribute oxygen; and the immune system destroys pathogens. When meat is grown in a bioreactor, all the same functions must still be accomplished, but at the expense of industrial energy. A bioreactor regulates temperature, food is predigested and fed to cells as simple sugars and amino acids, oxygen is pumped into the bioreactor, and all equipment is sterilized to prevent the growth of pathogens. Hence, a shift from livestock production to cellular agriculture could be a transition toward greater reliance on industrial energy.