Cultured meat start-ups and venture capital: What do the data say? 3 of 4

When it comes to cultured meat, venture capital funds are funding startups in California, Israel and the Netherlands. Some of the first work in this area was done by Mark Post at Maastricht University in the Netherlands to produce the proof-of-concept burger  featured at the August 2013 £250,000 (US $330,000) lab-grown burger unveiling event in London. According to an article by Mouat and Prince, “Before the hamburger event, the mystery benefactor that financed the burger was unknown. Later it was revealed that the funder was Google co-founder Sergei Brin (Net Worth: $53.8 Bn). The event was simulcast on the web and included a celebrity chef live-cooking the burger, a three-person tasting panel, and a live studio audience . At this event, Post estimated that if the process can be scaled up it would take 10–20 years to produce ‘beef,’ likely still at relatively high cost (Murray, 2018).

Memphis Meats made meatballs from cultured meat at $18,000 per pound in 2016. Somewhat ironically given the environmental footprint of airplane travel, Virgin Airlines founder Richard Branson (Net Worth: $3.8 Bn) joined Bill Gates in financing cultured meat leader Memphis Meats in part of a $17 million fundraising round in 2017.

“There is no doubt that the association of this iteration of biological technology with super-rich celebrity investors and venture capital is significant”  (Mouat and Prince, 2018).

Ground beef is not the only product that is being attempted in cell-based culture. There are a number of companies springing up making everything from ice-cream to egg whites to cowless milk. In 2014 Perfect Day (Muufri prior to August 2016) was offered USD$2 million in seed money from Horizons Ventures. According to Mouat and Prince (2018), one of the partners at Horizons Ventures, Li Ka-shing ‘loves disruptive innovations and sees it as kind of predictive lenses into the future. He loves to meet and geek with the founders and CEOs of companies within our disruptive portfolio, to understand their concepts and missions’. Horizons Ventures have also invested in Facebook, Spotify, Skype, Modern Meadow (lab-grown leather for disrupting the $90 billion per year leather industry). There has also been some state investment in these technologies (Stephens, 2015).

A list of the companies I could find is in Table 2 using data from this list maintained at Cell based tech (https://cellbasedtech.com/lab-grown-meat-companies) among other media sources – along with their location and the product they are trying to mimic. 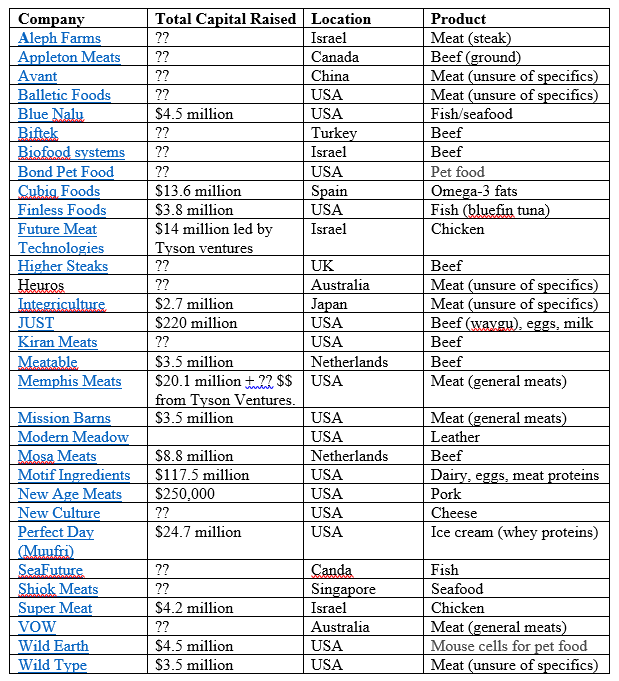 Table 2: Listing of companies formed to produce cellular animal-based products, and their location. Estimates of total capital raised is listed when known.

New Harvest, a 501(c)(3) research institute accelerating breakthroughs in cellular agriculture, collects and directs charitable donations and grants in the industry. Next to venture capital funds, large corporations such as Cargill, Merck, Google, UBS, and PHW Group have invested in these companies. Cargill invested in Memphis Meats. The sum of total capital raised in Table 2 is well north of USD$400 million. The Good Food Institute, a non-profit that promotes plant-based and cultured meat alternatives to meat, dairy, and eggs; estimated that in the five years leading up to 2018, USD$17.1 billion had been invested in plant-based food; with a further USD$73.3 million in cell-based meat companies.

Mouat and Prince (2018) use the term biocapitalism to describe the investment in cultured meat. They reflect that fundraising for companies trying to produce animal-free food – depends to varying extents on “a venture capital industry with a culture that celebrates ‘disruption’; a set of biotechnical materials and relations that are being pacified into a marketable object; an existing community of concern worried about the effects of animal agriculture; and the construction of ethical agency for animal-free food to solve the problems that this community is so concerned with. It is all of these things that enable value to be leveraged off the biological material that makes up animal-free food, and so constitutes it as biocapital.