Who is selling cultured meat? What do the consultants and the data say? 4 of 4

Nobody is selling it yet, at least as far as cultured meats go, because no one has reduced the production  to a commercial scale. But the concept is being sold hard.

In October 10, 2019 a Jerusalem biotechnology company Future Meat Technologies announced it will establish the world’s first cultured meat pilot production facility, “producing GMO-free meat cultivated directly from animal cells on a commercial scale”.  According to an Israeli press article “The company plans to establish the facility south of Tel Aviv and begin operations next year. The expansion of research and development efforts come after the start-up secured $14 million in a Series A funding round. The company plans to introduce hybrid products into the market, combining plant proteins for texture with cultured fats to create the aroma and flavor of meat. While existing costs are $150 per pound of chicken and $200 per pound of beef, it aims to market its hybrid products at a “competitive cost level” from its pilot production facility by 2021.”

According to the June 2019 report by consulting firm A.T. Kearney, they predict that “In 20 years, only 40% of global meat consumption will still come from conventional meat sources”. They posit that “Cultured meat will win in the long run. However, novel vegan meat replacements will be essential in the transition phase”. In their estimation by 2040, cultured meat will make up 35 percent of meat consumed worldwide, while plant-based alternatives (e.g. Impossible, Beyond Burger) will compose 25 percent. 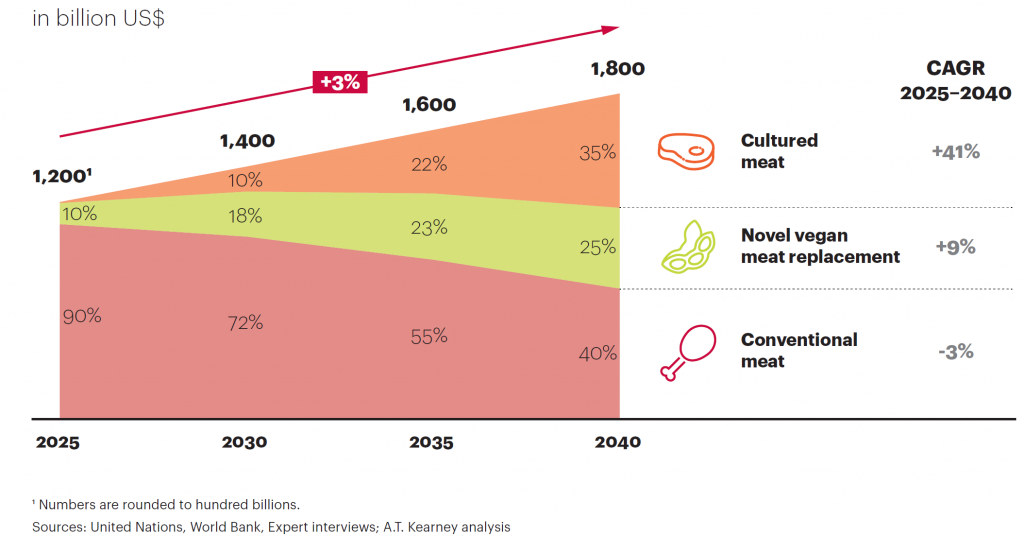 Projected breakdown of global meat production by 2040 according to a June 2019 A. T. Kearney Analysis.

One trillion, two hundred forty billion, seven hundred & sixty-one million, five hundred and twenty-nine thousand, five hundred & fourteen (1,240,761,529,514) cultured meat burgers annually by 2040. That is a big ask in 20 years for an industry that does not yet have a single product on the market!

As with all ‘disruptive innovations’, there is a need to consider the pros and cons of the system that is being proposed as compared to the existing system. There will always be tradeoffs, some good, some bad. There are positive externalities associated with ruminants such at the ecosystem services they provide when they graze rangeland.  Grazing ruminants are embedded in the definition of rangelands—“a natural ecosystem for the production of grazing livestock and wildlife.” Grasslands and their associated biodiversity frequently evolved with large hoofed herbivores; well-managed, herbivorous grazing by ruminants maintains rangeland health.

Ruminants also provide manure, transportation, the livelihoods and food security of an estimated 1.3 billion livestock keepers. Small ruminants – sheep and goats – produce only about 4% of global animal-source protein. However, they are a very important source of such protein in the developing world as they are able to upcycle plants that are inedible for humans into high quality animal-souce foods. THAT is the magic super-power of grazing ruminants. The rumen’s microbial population can transform inedible grasses and other cellulose-based forages into energy. Additionally ruminants produce more than just hamburgers. Milk is by far the most consumed animal-source food globally, and dairy animals also produce both milk and meat.

Mattick et al. (2015) writes of cultured meat, “These energy dynamics may be better understood through the analogy of the Industrial Revolution: Just as automobiles and tractors burning fossil fuels replaced the external work done by horses eating hay, in vitro biomass cultivation may similarly substitute industrial processes for the internal, biological work done by animal physiologies.” Meaning external energy sources will be used to replace the work of the biological processes that take place in the cow. The authors continue with this train of thought, “That is, meat production in animals is made possible by internal biological functions (temperature regulation, digestion, oxygenation, nutrient distribution, disease prevention, etc.) fueled by agricultural energy inputs (feed). Producing meat in a bioreactor could mean that these same functions will be performed at the expense of industrial energy, rather than biotic energy.” Cultured meat would replace  a biotic system with a fermentation factory powered by industrial energy. The abstract of their paper concludes:

“While uncertainty ranges are large, the findings suggest that in vitro biomass cultivation could require smaller quantities of agricultural inputs and land than livestock; however, those benefits could come at the expense of more intensive energy use as biological functions such as digestion and nutrient circulation are replaced by industrial equivalents. From this perspective, large-scale cultivation of in vitro meat and other bioengineered products could represent a new phase of industrialization with inherently complex and challenging trade-offs.”

In summary, cultured meat is a term used to describe imitating a range of animal products from animal cells grown in a bioreactor. Although there is a lot of venture capital and celebrity investor buzz around this technology, there is no company that is currently selling cultured meat. There are a number of unknowns about the feasibility of culturing animal tissues at scale, and the true environmental impact of using energy to replace the biological functions carried out by the body of an animal (harvesting forage for energy and growth, waste removal, fighting off disease etc.). Growing animal cells efficiently and keeping contaminants out of the system and end product requires attentive management and innovation, whether meat is produced in a biotic system that is powered by solar energy and the physiology of a cow, or an industrial system using electricity and a bioreactor to produce cultured meat in a manufacturing plant.