This is part 1 of a 1, 2, 3 part BLOG series on this January 2020 two-day event featuring Dr. Vandana Shiva at UC Santa Cruz

In late January, 2020 I attended two events at UC Santa Cruz, a sister campus to UC Davis, and also where my tuition fees go to pay for the (presumably fact-based) education of my “banana slug” son who is a senior there. It was therefore with some concern that I read that Vandana Shiva had been invited to speak on campus. Dr. Shiva has been a polarizing figure in the genetically modified (GMO) foods discussion, as detailed by Michael Specter. But I personally had never heard her speak and as a scientist and someone who is trying to understand why the GMO debate has become so polarized, I decided to sign up and listen closely to what Dr. Shiva had to say, both at her Saturday evening lecture, “Vandana Shiva In Conversation”, and the following all day event entitled “Poison-Free, Fossil-Free Food and Farming.”

The Saturday night lecture, to a very receptive and supportive crowd, conversed on a range of topics, from empowering women farmers to the importance of nutritious food, the impact of climate change on food production systems, and the importance of seed banks.  Hard to find fault with any of those topics, in fact I agreed with Dr. Shiva on a number of her points. There was a lot of disparaging of “industry” and billionaires, especially Bill Gates despite his philanthropy, and much demonization of globalization and colonization.

As an agricultural scientist I took issue with the lack of evidence to support some of the overly optimistic anecdotes that were given regarding the productivity of different organic and agroecological production systems, because if they really were so much superior it makes little sense as to why would ALL farmers, as astute business owners, would not rapidly employ such production systems. Perhaps it is more complicated than was suggested.

The contention that organic production systems outcompete conventional systems is not supported by the weight-of-evidence in the peer-reviewed literature, and is one of the reasons that less than 1% of US farmland is under organic production.  But it was when discussing anything related to GMOs, Monsanto, patents and especially glyphosate (Round-up) that things (perhaps as might be expected) went totally off the rails. I will get into a couple of the specifics of that for those who are interested in fact-checking in part 2  (Sponsoring Falsehood) and part 3  (Rounding Up Fear) of this BLOG series.

The next day a group of very like-minded people discussed collective action ways to move California agriculture to “poison free” and “fossil-free”, meaning avoiding the use of all synthetic pesticides and fertilizers. California is a large agricultural producer, the largest state in the nation. Although the speakers talked a lot about social justice and empowering farmers, there were no California farmers or farm workers, those who would presumably be most likely be impacted by the proposed changes, represented on the panel of speakers. 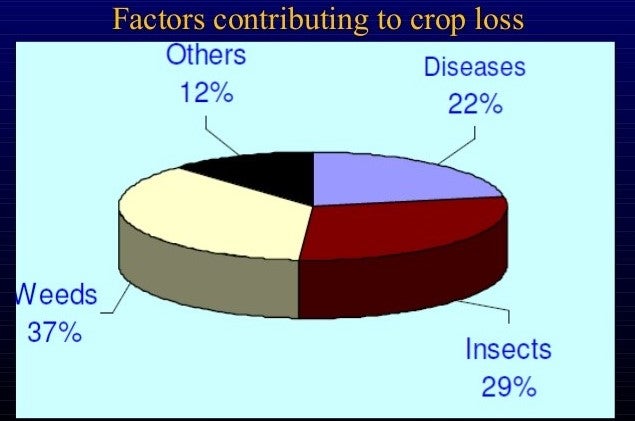 Crop loss to different factors in the absence of effective controls

There was discussion about the need for farm-workers to be paid a living wage, but little discussion of what removing all pesticides and fertilizers might mean for those same farm-workers in terms of their job duties, or the economic sustainability of the farms that provide their employment. In other words, there was NO discussion of what trade-offs might result from this re-envisioning of the entire agricultural production system in California.

In the course of my job I interact with California farmers and ranchers, some conventional and some organic, and others somewhere in between to meet certain value-added program requirements (e.g. “never ever”, “non-GMO”). I watch how farmers under different production systems handle the nutrient needs of their crops, and control pests; be they disease-causing microbes, hungry insects, or moisture-seeking weeds.  Chicken manure from conventional chicken houses systems is composted and used as fertilizer on organic production systems, conventional almond hulls provide a good source of nutrients for dairy cows precluded from GMO-feed, and farm-workers control weeds in production systems that do not allow to use synthetic herbicides using tillage, propane flame throwers, and manual hoeing as pictured below.

India, where Dr. Shiva lives, with its population of 1.27 billion people, employs 59% of the country’s total workforce in Agriculture. Seventy percent of its rural households still depend primarily on agriculture for their livelihood, with 82 percent of farmers being small and marginal. It is also home to a quarter of the world’s hungry people and anemia affects 50 percent of women and 60 percent of children in the country. There are certainly good reasons to be concerned about improving both food security and the productivity of agriculture in that country.

However, California agriculture is not comprised of small subsistence farms. It is an agricultural powerhouse.  California’s 77,100 farms and ranches received a total of $50.13 billion for their output in 2017 with combined commodities representing 13.4 percent of the U.S. total. California’s leading crops are fruits, nuts and vegetables. Over 27 percent of California’s 77,100 farms generated sales over $100,000, greater than the national average of 19.9 percent. The average farm size in California is 328 acres, which is below the national average of 444 acres. These are large enterprises to manage and farm, and the challenges facing California farmers are likely quite different to those of a small holder, subsistence farmer. What might California agriculture look like if synthetic pesticides and fertilizers were banned?

Back in 1840, workers in the agriculture industry made up 70% of the American workforce. Today farmers and ranchers themselves make up only 1.3% of the employed US population, totaling around 2.6 million people. Part of this urban transition has been enabled by the use of synthetic herbicides in agriculture. According to the author of an article entitled The Value of Herbicides in U.S. Crop Production, “By controlling weeds effectively, herbicides do the work of 70 million laborers.” In that article it is stated that “the problem of controlling weeds without herbicides has been cited numerous times as the single biggest obstacle to crop production that organic crop growers encounter.” USDA reports on strawberry, carrot, cotton, and processing tomato concluded that national production would decline by 30%, 48%, 27%, and 20%, respectively, without the use of herbicides and with the substitution of likely alternatives.

More generally, it has been estimated that without pesticides, 70% of the world food crop would be lost; even with pesticide use, 42% is destroyed by insects and fungal damage. According to one study, “Dispensing with pesticides would require at least 90% more cropland to maintain present yields. Dispensing with fertilizer would require at least 400-600 Mha additional cropland (in addition to the ~1,400 Mha currently grown).

“The consequence of less-efficient agriculture will be the elimination of wilderness that by any measure of biodiversity far exceeds that of any kind of farming system.”

There was a real sentiment in the room that all pesticides were “poisons”, and that no amount of pesticide (or inorganic fertilizer) was acceptable. And all of this seemed to be based on the premise that agriculture today is using ever increasing amounts of more toxic (poison) pesticides. The figure below on pesticide use in U.S. Agriculture from 1960-2008 , from a 2014 report from the USDA ARS, states “Average chronic toxicity declined, as toxic products applied to cotton (such as DDT and toxaphene) and to corn (such as aldrin) were banned (particularly in the 1970s and early 1980s). Other factors affecting toxicity were the use of less toxic insecticides, such as carbaryl and chloropyrifos, the introduction of pyrethroids, the use of malathion in the boll weevil eradication program, and the use of Bt [insect-protected, genetically engineered] cotton since 1996. 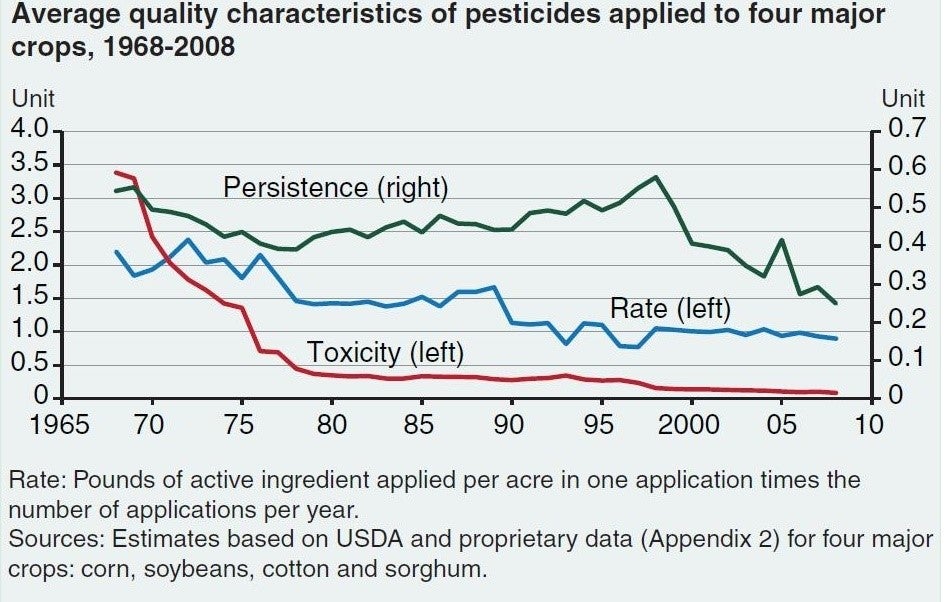 Persistence fell during the 1970s after the bans of DDT and aldrin, then increased during the 1980s and early 1990s (in part with the use of high-persistence products such as metolachlor and pendimethalin); persistence has declined in recent years, reflecting the rapid increase in glyphosate use. Glyphosate has low chronic toxicity (a high chronic score) and relatively low persistence relative to the herbicides that it has replaced. As the NRC (2010) report states, glyphosate “is biodegraded by soil bacteria and it has a very low toxicity to mammals, birds, and fish.”

There was none of this type of evidenced-based data presented at this all-day event. Let alone data that documented that GMO crops had actually decreased insecticide use, especially organophosphate insecticides including in India, and allowed the use of less toxic herbicides. Unfortunately, non-Bt cotton refuges were rarely planted in India, which increased selection pressure for Bt-resistant pink bollworms thereby reducing the effectiveness of Bt cotton in that country, and highlighting the importance of integrated pest management, a term I did not hear mentioned at this conference.

I was disappointed that at a public university event on agriculture there were no public sector toxicologists to present objective facts and data on pesticide use in agriculture, integrated pest management specialists, or California farmers present to discuss potential trade-offs,  and what poison-free, fossil-free California agriculture might mean for their farms, their workers, their families and their livelihoods. The discussion did not reach beyond a simplified dichotomous framing of good versus evil, and was a missed opportunity to have the more nuanced discussion that such a weighty and important topic deserves. But things got much worse at the all day event entitled “Poison-Free, Fossil-Free Food and Farming” as detailed in the final part Rounding Up Fear of this 3-part BLOG.