DNA is NOT a drug. And regulating genome edited research animals as a drug is unworkable.

Investigational research animals that have been genome edited CANNOT enter the food supply in the United States, irrespective of the edits they carry, unless the researcher that has produced that animal has submitted an FDA Investigational New Animal Drug (INAD), and additionally has obtained a food use authorization which requires a TON of paperwork and also data collection. PERIOD. So when I read the headline, “Gene-edited beef cattle receive regulatory clearance in U.S.”, I felt the need to pen this BLOG. And it is a little wonky (in the political sense) because that is the nature of regulatory discussions.

While it is true that the FDA decided to exercise enforcement discretion for two slick founder animals produced by a company, Recombinetics, this “enforcement discretion” option is only available to developers. And this decision was not a “regulatory approval”, but rather it was a determination by the FDA that this product was low risk enough that it is not an FDA enforcement priority. In other words, a blind eye will be turned to the sale of this “unapproved animal drug” as it is deemed low risk. And that would be quite appropriate given the low risk of this product. But what is not obvious from the press coverage is 1) This decision is made on an individual animal basis (i.e. the data for EACH genome edited animal needs to be submitted to the FDA) and this particular decision was for two cattle and their future offspring, and 2) This path is only available to commercial developers who are bringing a product to market, not academic or university researchers who are researching genome editing.

If I, as an academic researcher, was to perform exactly the same edit and make a slick genome edited cow, the only way that I could have that animal enter commerce and the food supply would be to open an INAD, and then request a food use authorization. And I know exactly the amount of work involved in doing that as I have spent basically the entire pandemic trying to obtain food use authorization for some genome edited knock-out (gene deletion) research sheep and cattle we have produced at UC Davis. Spoiler alert – I did not obtain a food use authorization. However, I was eventually given permission to render them – meaning their carcasses could enter the animal feed chain (i.e. dog food).

To request an INAD, the sponsor (i.e. me in the case of a university professor), must provide the FDA information including an overview of the project objectives, a description of the constructs or genomic alterations in the animal, a description of the method(s) or technologies used to produce and deliver/introduce the genomic alteration, and a description any completed studies including any relevant information from other animals in which the same genes have been knocked out (e.g., references to published articles characterizing knockout mice). Additionally, a request for “a categorical exclusion from the requirements to prepare an environmental assessment” must be submitted to accompany the INAD file. When FDA reviews and approves new animal drugs, it has to comply with the requirements of the National Environmental Policy Act, which includes a review of environmental risks, if any, where required. Requesting this exclusion entailed certifying that no extraordinary circumstances existed whereby the gene-edited cattle could significantly affect the quality of the human environment. This required documenting the location of facilities where the animals were housed, containment measures, management practices and conditions for all facilities, animal waste and animal disposal, and a description of standard operating procedures, and submitting this information to allow for a determination to be made.

Upon obtaining an INAD, then an investigational food use authorization (FUA) must be requested to introduce the knock-out sheep and cattle into the food supply at the completion of the experiment, rather than incinerating them. For this, the information in Table 1 was requested. 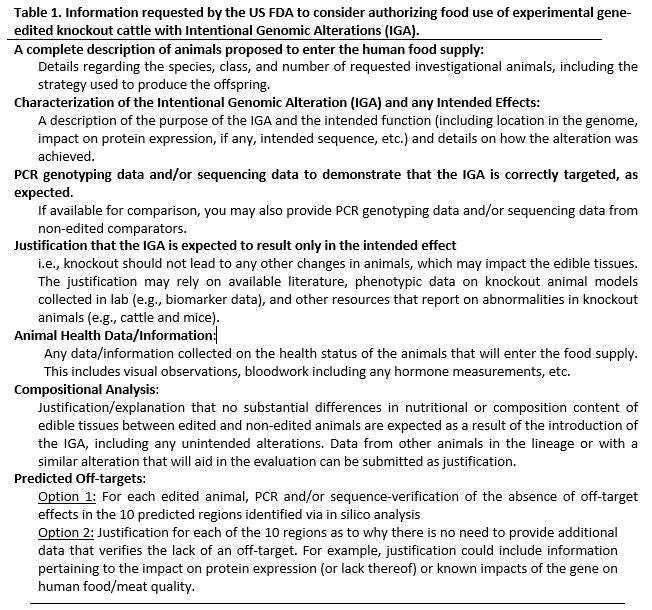 The “Predicted Off-targets” in silico analysis included 10 sequences with three mismatches to the guide sequence in the reference cattle genome. There were no sequences with less than three mismatches other than our target, as per our guide design. Given the (graduate student) time and experimental expense involved with performing this off-target sequence verification for 10 loci for each of the animals, and the fact that these analyses were unrelated to the graduate student’s  scientific interest in these animals (meaning we would be doing these analyses solely for the FUA), the FUA was abandoned in favor of requesting a rendering use authorization.  This meant that the animals would be allowed to enter the animal feed chain, rather than the human food chain at the completion of the experiment.  To obtain rendering authorization required a separate application to the FDA Division of Animal Feeds. Similar information to that outlined in Table 1 for the FUA was requested, but this request did not require off-target sequence verification.

Such regulatory interactions are not a routine part of basic academic research in animal breeding and genetics. Neither is disposing of all animals by incineration, burial, or composting at the completion of a research project. This is particularly expensive when working with large livestock species, and is a unique expense associated with the use of gene-editing in food animals not incurred when researching conventional breeding methods. Further, these regulatory data are typically being requested prior to the conclusion of the experimental work, rather than at the completion of the research when manuscripts describing and detailing the methods and results are typically being compiled and written. As such, preparing these documents required that I dedicated a substantial amount of time solely for regulatory compliance, and pursuing a FUA would have required further additional experimental work. This experience has definitely dampened my enthusiasm about performing further research with genome edited livestock in the United States.

I should mention that there are also fees associated with all of this. As an academic institution, UC Davis is eligible for a fee waiver, however the Animal Drug User Product and Sponsor (ADUFA) Fees are substantial. And while these fees might be quite reasonable for an actual new animal chemical drug evaluation, it becomes hard to wrap your head around a half million dollar fee to get a single nucleotide polymorphism approved, when nature has made literally millions of unregulated SNPs in cattle genomes. UC Davis actually recently received an errant  ADUFA bill for over $140,000 as the fee waiver requests to the FDA were apparently misplaced, and that definitely got the attention of the University! 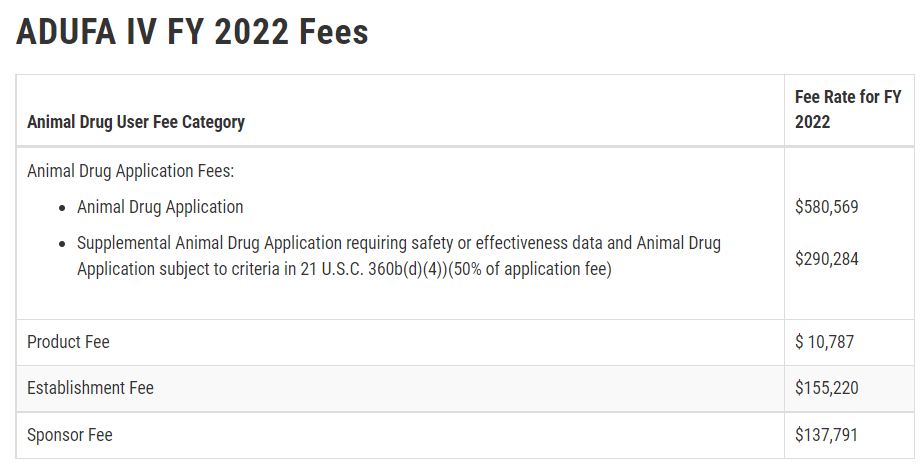 At the end of the day, most academic researchers did not sign up to be regulatory scientists. And while I appreciate the need for such scientists to provide data to get approval for commercial products, it is not something that is of academic interest to me. I have little desire to undertake research to show that there are no substantial differences in nutritional or composition content of edible tissues between edited and non-edited animals unless that was the purpose of the edit (my upcoming paper on the meat and milk composition of the offspring of a genome edited polled bull not withstanding! Spoiler alert **** THERE WAS NO DIFFERENCE BECAUSE HORNS ARE UNRELATED TO MILK AND MEAT COMPOSITION OR SAFETY*****), nor in verifying the absence of hypothetical off-target sites in the genome so that our experimental knock-out animals can enter the food chain. I fear that this regulatory approach will effectively preclude public sector research into genome editing with food animals in the United States.