I binge watched Unnatural Selection on NetFlix last night, because it is of dual interest to me – both from the perspective of my research, but also because of my interest in science communication. I had also spent a couple of days with the directors, Leeor Kaufman and Joe Egender, at UC Davis in late 2017 and early 2018 as they filmed some of our discussions with the public over the use of genome-editing to produce the “hornless” dairy animals we have been researching.

Ultimately the miniseries ended up not including any of the agricultural applications of genome editing, as the directors wrote to me in an Email earlier this month, “we were not able to open the discussion about food engineering within the scope of 4 episodes.” They rather focused the show on the biomedical and gene drive applications for pest control noting that “other stories – especially of the patients – became larger than we anticipated, making it very difficult to introduce such a broad subject in between.”

I can certainly understand the emotional appeal of treating genetic conditions, and that such framing lends itself to narrative storytelling. However I believe it unfortunate because the many researchers I know working in this area are addressing very real and pressing problems in food production, and we have not had much success at effective science communication on the need for these genetic innovations in agricultural production systems.

One of the more bizarre characters featured on the miniseries was a dog breeder called David Ishee located in Mississippi who was apparently trying to create a green fluorescent mastiff puppies by adding Green Fluorescent Protein (GFP)-expressing E. coli to dog sperm. I just watched dumbfounded, knowing all of the animal use authorizations and regulatory hurdles we have to go though to perform any animal research on campus. And also  because that is not how genetic engineering works, that is not how any of this works. If it was that simple, my laboratory would not have spent the last three years trying to get a CRISPR knock-in cow. 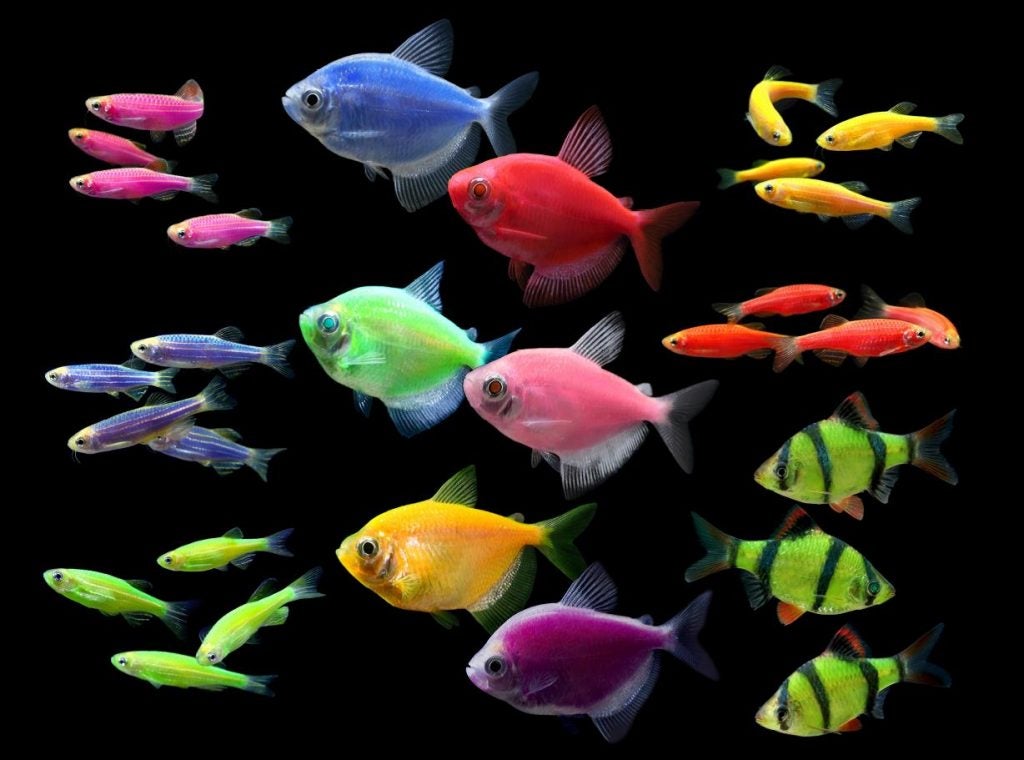 It is possible to get fluorescent animals, like the GloFish. But they are expressing a transgenic fluorescent gene under the control of a eukaryotic muscle promoter, and this recombinant DNA gene construct was integrated into the genome though genetic engineering in developing eggs. The reason you can see fluorescence clearly in Glofish is that they are somewhat translucent. Mastiff puppies are not. Even if it green fluorescent protein (GFP) did somehow find itself expressing in these puppies, it would not express or be visible in their dark hair. It is similarly lacking in the plumage of the GFP-chick in the featured image made by the Roslin Institute.

A fluorescent rabbit was made 20 years ago,  in the bizarre case of Alba the GFP-bunny. In 2000, Eduardo Kac, a professor of art and technology at the Chicago School of Art Institute produced a picture of a green fluorescent protein (GFP) transgenic bunny called “Alba”. “GFP Bunny” was realized in 2000 and first presented publicly in Avignon, France. The artist proposed that “transgenic art” is a new art form based on the use of genetic engineering to transfer natural or synthetic genes to an organism, to create unique living beings. 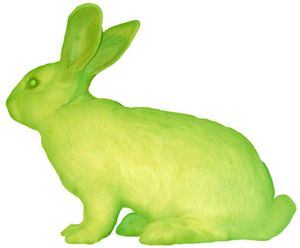 The artist came under considerable criticism for the picture which some consider to have been fabricated. According to a 2002 Wired article “The picture itself is a construction,” said Reinhard Nestelbacher, a molecular biologist at the University of Salzburg.  “The rabbit could never look like that,” he said. “The main reason is that the GFP gene is expressed, for example, in the skin and cannot be expressed in the hair.” Stuart Newman, a member of the Council for Responsible Genetics and a cell biologist at New York Medical College, said “Art misrepresents reality all the time — and he’s an artist, not a scientist, but I think people are beholden to tell the truth.”

Which raises an interesting question, are artists beholden to tell the truth about genetic engineering?

And that is I think what frustrated me most about the miniseries. This was potentially an opportunity to have a fresh look at this technology of genome editing, and how it does and does not differ from the older technology of genetic engineering. The two technologies were rapidly conflated in the miniseries, along with other issues such as the cost of medicine in the US healthcare system. And while these tensions were thoughtfully addressed, I would argue the tensions around food production are equally important and were not addressed.

There is a very real reason that the public fears the use of genetic engineering in food production, and it is not the science or decades of safe use. It is a deliberate misinformation campaign that has been waged by competing-business interests and special-interest group for decades. That topic warrants its own examination.

It was therefore somewhat ironic to see Dana Perls from “Friends of the Earth” as one of the interviewees in Unnatural Selection. She was unchallenged when allowed to repeat the same unsubstantiated talking points around genome editing and food safety risks that have been parroted for decades to demonize genetic engineering,   This to me was opening a discussion around food engineering, but in the absence of any mention of the 30 years of safe use, or the overwhelming weight-of-evidence.

Just as there is money to be made in commercializing pharmaceutics, there is money to be made in fermenting fear, uncertainty and doubt, especially against your competitors. If those same special interests again direct their well-funded coffers towards a campaign against the use of genome editing in food production, then I fear that as a society we will lose. We will forgo the benefits that could result from bringing in useful genetic variation like disease-resistance into our food species using genome editing.

One of the most powerful stories in Unnatural Selection was that of a young boy who had a genetic condition that threatened his sight. And the $850,000 treatment that might help save him from blindness. It is very moving part of the series, as we see his parents grapple with their frustration at his deteriorating sight.

There is a non-genetic condition that results in between 250,000 and 500,000 children going blind every year, Vitamin A deficiency. And yet the war that special interest groups like Greenpeace and Friends of the Earth have waged against GMOs for the past 30 years, in concert with the retarding force of government regulations on GMO crop development, has slowed the release of vitamin-A enriched crops as detailed in this recent book, Golden Rice: the imperiled birth of a GMO superfood.

The 2019 Wolf-prize for Agriculture laureate Prof. David Zilberman from University of California at Berkeley, estimated in 2014 that if Golden Rice had not be delayed in India alone it would have  “prevented 600,000 to 1.2 million cases of blindness, and about 180,000 deaths of children.” Likewise 129 nobel-laureates “have joined in a campaign to convince the Green Parties and the public that they should support the use of GMOs, especially for the sake of the developing world”,

Fortunately, after millions of dollars and years of effort, the United States, Canada, Australia, and New Zealand have all recently approved golden rice as safe for consumption. Golden rice is in now front of regulators in the Philippines and in Bangladesh, where it is expected to be approved by the end of 2019. There it will have the opportunity to benefit many poor children, each of whom have parents who I am confident are equally anxious and concerned about addressing  the preventable blindness of their children. Perhaps emerging developments in food engineering with such profound beneficial health implications are worthy of their own miniseries!