I have been fairly consistent about my concern that the 2017 FDA’s draft guidance to regulate “intentional genomic alterations” in food animals as new animal drugs will preclude the use of this technology in livestock breeding programs in the United States. The webinar that was held today by the FDA Center for Veterinary Medicine (CVM) did little to assuage my concern. For two hours, various speakers from the FDA CVM explained how they were going to regulate IGA (intentional genomic alterations). That is a lot of 3-letter acronyms (the scariest of all acronyms!).

There was lots of discussion of frightening sounding off-target effects, small to large-scale alterations, unintended biological consequences, unknown long term effects not apparent in early generations, deletions, insertions, inversions, lesions, translocations, mutations being deleterious regardless of whether they occur in a coding region, and challenges to addressing unintended on and off target effects. What there was not much discussion of is biology and context. And the fact that there are literally millions of “insertions, inversions, lesions, translocations, and mutations” in every plant and animal on Earth.

As we argue in this open access 2019 paper entitled “Proposed U.S. regulation of gene-edited food animals is not fit for purpose”

To put this in perspective, one study of whole genome sequence data from over 2,700 individual cattle in the 1000 Bull Genomes Project revealed more than 86.5 million differences (variants) between different breeds of cattle. These variants included 2.5 million insertions and deletions of one, or more, base pairs of DNA, and 84 million single nucleotide variants, where one of the four nucleotides making up DNA (A, C, G, T) had been changed to a different one. None of these naturally-occurring variants are known to produce ill effects on the consumers of milk or beef products. In fact, every meal we have ever consumed is genetically distinct from every other meal in terms of genomic DNA sequences. Genetic variation per se does not pose a unique hazard as it relates to food safety. All non-processed foods harbor DNA as a natural component and that DNA is different in every individual of every food species (both plants and animals). 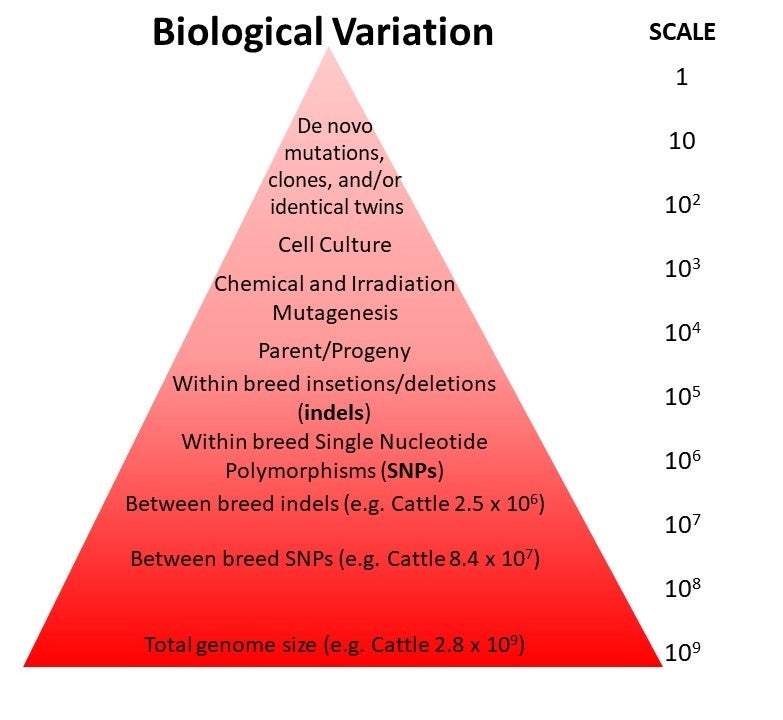 Visual representation of the magnitude of DNA sequence variation (i.e. naturally-occurring mutations) that exists between different individuals within a species. Image from Van Eenennaam et al. (2019)

A number of other countries have come out with their regulatory approaches to genome editing in food species, including the USDA opinion regarding genome edited plants, and the FDA is alone in considering a genetic alteration in a food animal to be a drug. And while under proposed U.S. law it is technically not the animal but the IGA (not the grocery store but the “intentional genomic alteration”) that is the drug, short of a centrifuge it is pretty hard to disassociate an animal from its genomic DNA! Animals carrying IGA effectively become unapproved animal drugs that are not allowed to enter commerce in the absence of a multigenerational safety and efficacy evaluation and FDA approval, analogous to the types of studies that are required for the approval of actual new animal drugs.

All of this comes about because 10 years ago the FDA announced its intent to regulate all genetically engineered animals modified by rDNA techniques, including the entire lineage of animals that contain the modification, under the new animal drug provisions of the 1938 Federal Food, Drug, and Cosmetic Act (decades before the discovery of the structure of DNA).  In that act, a new animal drug is defined as “an article (other than food) intended to affect the structure or any function of the body of … animals.”

The 2017 FDA draft guidance on gene edited animals doubles down on this approach by proposing to regulate all genomic alterations introduced into animals by gene editing as new animal drugs. This includes many of the same nucleotide insertions, substitutions, or deletions that could be obtained using conventional breeding. No longer is it the presence of a transgenic rDNA construct that triggers mandatory premarket FDA regulatory oversight prior to commercial release, but rather it is the presence of any “intentionally altered genomic DNA” in an animal that initiates oversight.

What concerns me, after listening to the webinar, is that it was really not stated what unique risks are feared to be associated with IGA, that are not also associated with UGA (unintentional genomic alterations), aka de novo mutations that are very basis of evolution. We do not regulate the millions of spontaneous genetic variations that are in our food because DNA is generally regarded as safe to consume, and it is a routine ingredient of food obtained from any species, irrespective of its sequence. Referring to a DNA sequence variant as a “drug” is likely to confuse or frighten consumers who might infer that there are biologically active substances in their food.

I am of the opinion that this proposed regulatory approach for genome editing in animals will effectively make it cost prohibitive for both U.S. researchers and livestock producers to use and potentially benefit from genome editing in food animal breeding programs. I am not alone in this concern. Over 300 scientists supported a petition calling for  the Harmonization of US gene-edited food regulations which was launched in January at the 2019 Plant and Animal Genome meeting. Signatories include over 260 US scientists from more than 40 academic institutions throughout the nation including members of the National Academy of Science, Engineering and Medicine (NASEM), and a Nobel prize laureate. When scientists are riled up enough to emerge from their laboratories and express an opinion about something as arcane as a regulatory guidance, perhaps it is worth listening.  The petition concluded with the following ask:

“We call for a harmonization of the U.S. regulatory approach to gene editing in food species so that both plant and animal breeders have access to gene editing innovations to introduce useful sustainability traits like disease resistance, climate adaptability, and food quality attributes into U.S. agricultural breeding programs.”