Genetic Engineering of Livestock: 35 Years of Inaction (1 of 3)

This is part 1 of a 1, 2, 3 part series on Genetic Engineering in Livestock

2020 signals the dawn of a new decade, 35 years after the arrival of the first transgenic livestock, and offers an opportunity to let knowledge gained inform current and future perspectives. Despite the fact that genetically engineered (GE) crops have been commercialized for 22 years and were grown on 191.7 million hectares by 17 million farmers in 26 countries in 2018, only a single GE food animal has ever been commercialized. There are a myriad of reasons for this disparity, including technical issues, differences in the commercial structure of animal breeding programs versus seed propagation, regulatory obstacles, and public perception and ethical concerns around animal experimentation and welfare.

Early reviews on transgenic food animals detailed some of the technical issues associated with the production of GE livestock including low rates of transgene integration, mosaicism, unpredictable expression patterns due to the random location of introgression, and the expense associated with the production of large transgenic food animals. Almost without exception these papers finished with optimistic projections regarding future developments and expected applications.

The first review I could find was written in 1985 prior to the production of the first transgenic livestock, and optimistically predicted that “Clearly, gene transfer and recombinant livestock offer a means to alter the fundamental genetic makeup of livestock to a greater extent, in a few decades, than may have been achieved in the entire past history of the science of livestock genetics. Those of us involved in this research look forward to the challenge and promise of this exciting new technology”. I well remember that excitement during my undergraduate studies in agricultural science. 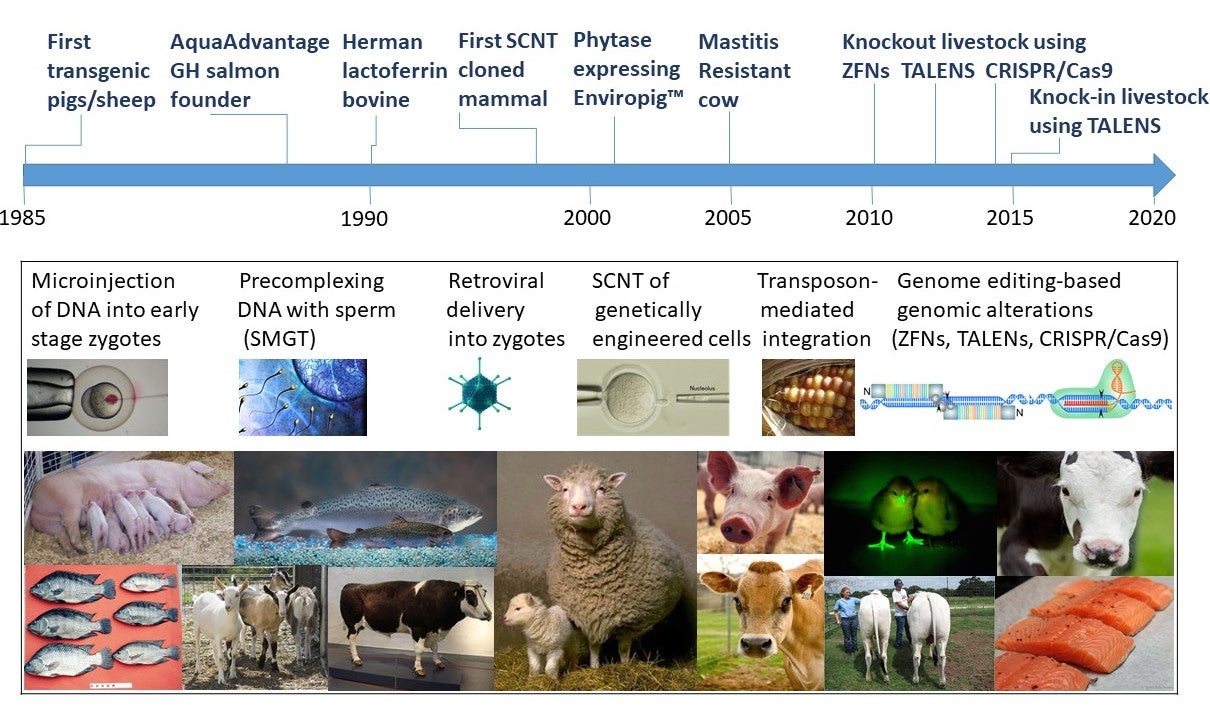 Figure 1. An abbreviated schematic history of 35 years of GE livestock featuring some of the well-known celebrities in the field.

Figure 1 summarizes the major milestones of GE livestock. It is sobering to contemplate the considerable scientific progress that has been made in the production and utility of literally millions of transgenic mice, and even in transgenic pigs for biomedical research, as compared to transgenic livestock for agricultural purposes where commercialized applications can be counted on one hand. One reason for this is the relatively small scientific community that has been working in this field due in part to a paucity of both public sector and private funding, especially as compared to basic and applied biomedical research.

It is also true that this research is very expensive. It was estimated that the cost of producing a single founder transgenic pig in 1992 was $25,000; and a single functional transgenic calf was put at greater than $500,000. The high cost of researching transgenic livestock has been, and continues to be, a major factor limiting those interested in exploring the potential of this technology for agriculture. Despite this, researchers have been trying to get food applications funded, especially those working on health and welfare traits.

The lack of progress on agricultural applications can be attributed to a scarcity of both public and private funding sources, and the absence of a clear path to market. In 2004 the USDA National Food Initiative (NRI) request for proposals (RFP), the main source of public sector agricultural research funding in the United States, read “For FY 2004 proposals are invited in the following priority areas…development and application of methods to modify the animal genome (e.g., nuclear transfer, embryonic stem cells and transgenics)”.

My own proposal to this RFP to produce transgenic cows that produce high omega-3 milk, following on from successful proof of concept experiments in mammalian cells and transgenic mice funded by the NIH, received a technical review which stated that “The techniques proposed are sound and there are no insurmountable obstacles in the proposed studies”. However, the reviewer continued “While it may be putting the cart before the horse, the proposal has not mentioned the problems with acceptance of transgenic food products. Given the “pure and wholesome” public perception of milk products, it may be particularly difficult to gain widespread public acceptance for transgenic milk products – despite their health benefits.” In the meantime, transgenic Fat-1 cattle and sheep have been successfully produced in China.

Likewise, my departmental colleague Dr. Elizabeth Maga, who in 2003 proposed expressing immune modulators in the milk of transgenic ruminants to improve animal health (following her successful experiments in transgenic mice and characterizing their milk), received a grant review which read “While the approach to express genes in animals to improve their resistance to bacterial infection has merit, the feeling was that the general public would not accept such animals, especially food producing animals. Demonstration that animals are clearly protected by ingested lysozyme would greatly strengthen this application and such demonstration could possibly sway the public outlook about transgenic animals.”

Despite that setback, Dr. Maga went on to produce GE goats expressing lysozyme in their milk, and clearly demonstrated that ingested lysozyme protects animals from bacterial infection including diarrhea (here,  here and here). Unfortunately, this has not swayed the public outlook about transgenic animals. Work on this application has now moved to the Northeast region of Brazil, where the number of infant deaths due to malnutrition and infectious diseases is high.

Then in the mid 2000s, the USDA NRI RFP language ominously shifted to “Priorities for Research Projects …development and application of methods to modify the animal genome to aid in the understanding of gene function or expression (e.g. RNAi, nuclear transfer, embryonic stem cells, and transgenics)”. With the added proviso that “Applications whose primary aim is to improve the efficiency in the production of clones or transgenic animals through manipulation of the nucleus will no longer be accepted by the Animal Genome program (emphasis added)”.

This directive continued for almost a decade, and the current USDA National Institute of Food and Agriculture (NIFA) RFPs do not even include the word “transgenic”. There has likewise been little private sector interest in taking transgenic food animals through an expensive and unpredictable regulatory process. In the absence of a clear and predictable path to market, there has been little support or market pull for transgenic animals from the livestock breeding sector.

As a result of these  issues, the promise of the multiple applications of transgenic livestock developed by research scientists  has never been realized. The publication date of much of the research in Table 1 is rather confronting, given that many date back to last century(!), and their agricultural or food-use applications have never moved beyond the research laboratory.

There have been some transgenic animal applications that have been successfully commercialized. There have been three approvals for therapeutic proteins produced by transgenic animals. These include goats producing ATryn1® (human antithrombin-III) approved to treat hereditary antithrombin deficiency by the European Commission in 2006 and by the U.S. Food and Drug Administration in 2009, rabbits producing RuconestTM (Rhucin® outside the EU) approved to treat hereditary angioedema in 2014 , and chickens producing KanumaTM (sebelipase alfa) in their eggs for the treatment of patients with a diagnosis of lysosomal acid lipase deficiency in 2015 .

Perhaps the most visual commercialized transgenic animal is the fluorescent aquarium “GloFish®”. These GE designer tropical fish, first produced by a laboratory in Singapore and licensed to Yorktown Technologies in 2003, are marketed to aquarists in the United States where they are now sold in every state in the nation. 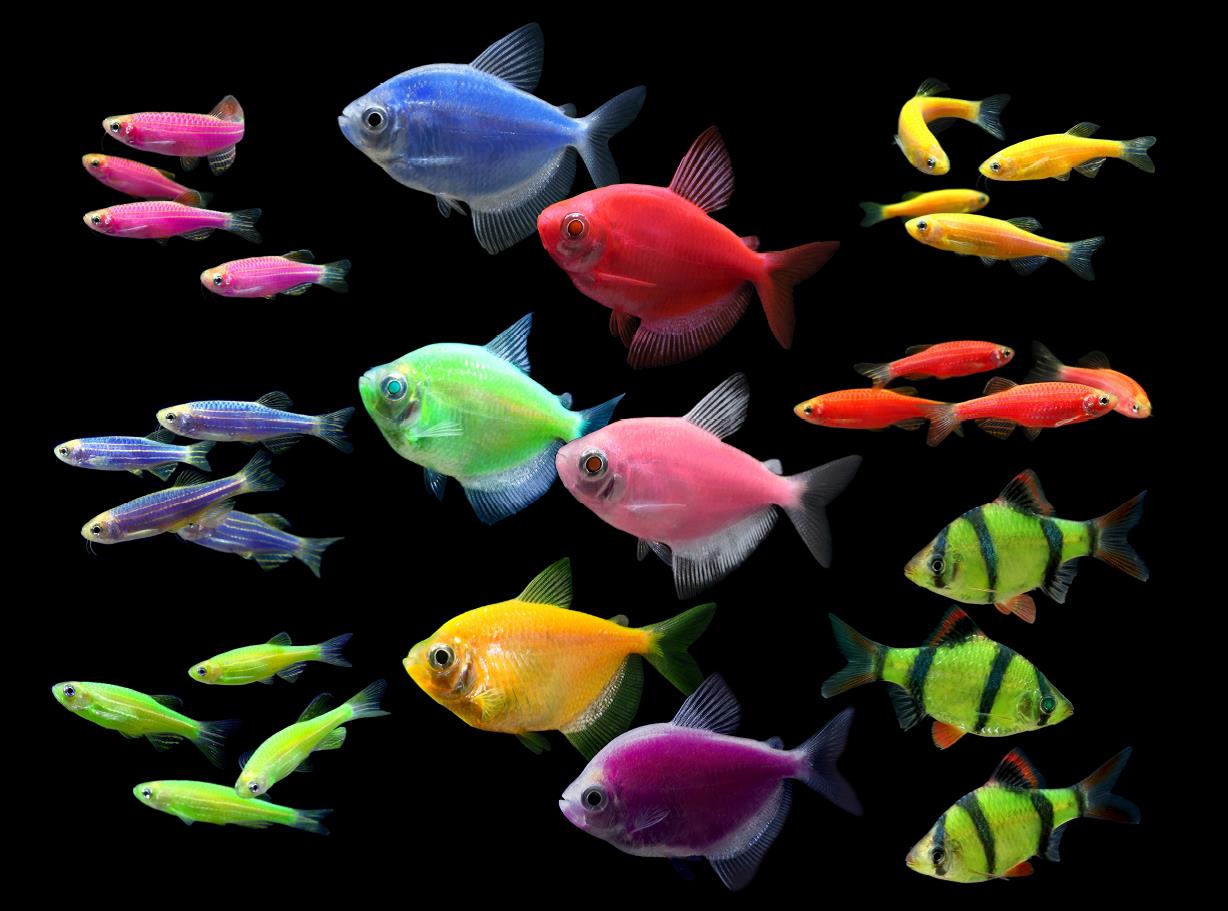 The GloFish® was allowed to come to market under “enforcement discretion”. According to the FDA website in 2003, “FDA chose to exercise enforcement discretion for a GE aquarium fish that fluoresces in the dark. FDA made this decision in part because the fish (Zebra danio) is not a species used for food, and in part because the agency was able to determine that it did not pose any additional environmental risks compared with conventional Zebra danios. Zebra danios are unable to survive outside the very warm waters of the tropics, which effectively limits the ability of an escaped or released fish to affect the U.S. environment)”.

The sale of GloFish is restricted in other countries including Canada, Europe, Australia, and Singapore . There are a total of four species of transgenic fish (zebrafish (Zebra danio), tetra (Gymnocorymbus ternetzi), tiger barb (Puntius tetrazona), and Rainbow Shark (Epalzeorhynchos frenatum)) in six fluorescent colors (Figure 2). GloFish® sales represent about 15 percent of US aquarium fish sales. Yorktown Technologies sold GloFish® to a consumer goods company for approximately $50 million in cash plus incentives in 2017. The success of this product suggests that consumers are willing to purchase transgenic animals, at least as aquarium pets. With regard to the public acceptance of transgenic animals, Alan Blake Chief Executive Officer and Co-founder of Yorktown Technologies stated at the 2015 Transgenic Research Conference  that consumers will purchase a product that they desire, irrespective of the breeding method that was used to produce it. In his words, “It is not about the process [of genetic engineering], it is about the product”.

The demand for GloFish, and more recently the Impossible Burger, a plant-based meat imitation product that contains GE ingredients, (and in the face of irrational activist opposition to such ingredients) would suggest that if GE products are allowed to come to market, at least some consumers are interested in purchasing them despite the protestations of opponents. Unfortunately regulatory costs and timelines have effectively precluded the advancement of all but one transgenic food animal to market, as detailed in Part 2 US Regulation of Transgenic Food Animals of this BLOG series.